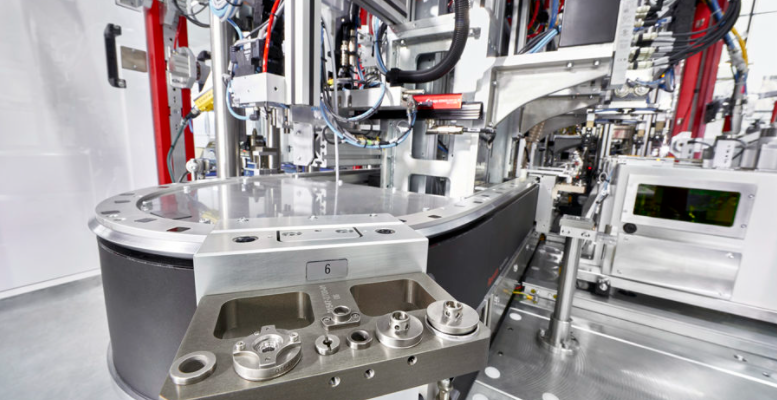 Automated assembly systems can be classified into two major categories: synchronous and asynchronous.

Synchronous systems are ideal for high-volume assembly of small products with long life cycles. Think spark plugs or syringes. Synchronous systems are driven by a central camshaft that rotates at a constant speed. Each assembly station is associated with one or more cams on the shaft. As the cams rotate, they trigger the stations to perform their tasks.

The problem with synchronous systems is that they’re not that flexible. Adding an assembly station can be difficult, because it may disrupt the carefully controlled timing of the system. Another problem is timing. Each process on a synchronous line needs to take about the same amount of time. So, processes that take longer than a second or two—leak testing, for example—are difficult to integrate.

Asynchronous systems don’t have these issues. In an asynchronous system, conveyors transfer parts on pallets from one station to the next. Assembly operations and pallet transfers are triggered by sensors or switches, instead of cams, and the overall system is governed by one or more computers or PLCs. Stations can easily by added or repositioned. These systems are ideal for assembling products with varying features.

Assemblers have a couple of options for transferring pallets from station to station in an asynchronous system.

The most common option is a conveyor that carries pallets on twin strands of belt or chain, such as the TS family of conveyors from Bosch Rexroth. Each strand rides in a track within an extruded aluminum profile. The profiles are separated by space, and only the edges of the pallet are supported. The strands provide just enough friction to move the pallet. But, if the pallet encounters a gate or another pallet, it stops and the strands slide freely beneath it.