Enabling the Factory of the Future

Con Belt > News > Enabling the Factory of the Future 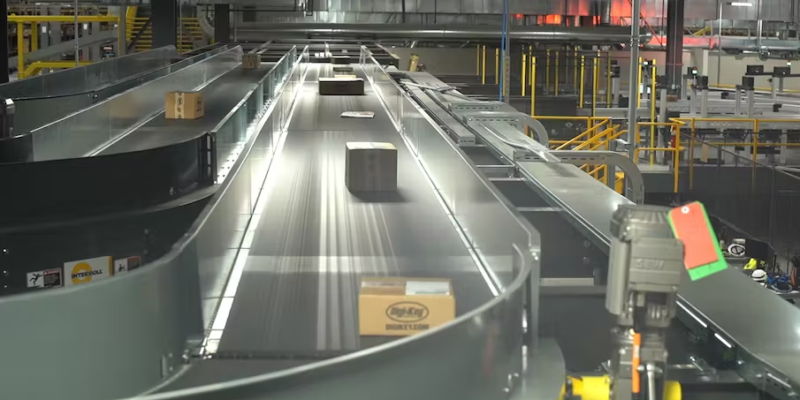 Enabling the Factory of the Future

Automation is an equalizer and is spawning a rapidly growing trend that’s advancing the use of robots to smaller factories.
Manufacturers using Robotics as a Service (RaaS) gain the benefits of robotic process automation by leasing robotic devices and accessing a cloud-based subscription service rather than purchasing the equipment.
Digi-Key’s state-of-the-art distribution facility, the new Product Distribution Center Expansion (PDCe), is held up as a prime example of a factory of the future.
As demand for smarter, safer and more efficient manufacturing continues to rise, advanced automation is answering the call, transforming the factory floor of tomorrow, and leading to a high level of consistency and reliability in products. Expedited by the COVID-19 pandemic, demand has spurred a cultural shift among manufacturers leading towards accelerated adoption of new technologies

From smart sensors to smart edge devices and cloud infrastructure, the impact that the Industrial Internet of Things (IIoT) has had on the manufacturing industry cannot be understated. IIoT enables more intelligent, predictive and proactive processes that lead to enhanced overall efficiencies.

Here’s a closer look at the smart manufacturing technologies that are revolutionizing the future of factories for the better.

We have now reached a point where, as a society, we are less afraid of robots or automation “taking away” human jobs because we’ve realized the immense benefits to be gained. It’s generally accepted that robots that work in tandem with humans—collaborative robots (cobots)—have huge potential for keeping workers safe and happy.

Reassigning tedious and/or repetitive tasks to a robot can shift the average manufacturing position to one that is more decision-based than task-oriented, as in the past. Humans can take on projects that require judgment calls or creativity, leaving heavy lifting and/or less-engaging work to robotics—therefore improving safety and reducing injuries.

Furthermore, while these robots are very complex machines, it often does not require a degree in computer science to learn how to re-program them to do more than one task. It’s common now to see more “general purpose” robots with computer vision that can adapt to different environments and quickly be re-programmed to serve more than one function.

Many leading companies are automating processes today, and we very much expect that to trickle down to many more companies in the near future. Tesla is one example of a factory that is really embracing automation and optimizing their processes. Apple has contracted out the recycling of their iPhones to a factory where robots disassemble the retired phones. They’re able to recycle some of the parts and retrieve some of the precious metals inside, with robots doing reverse assembly and keeping workers safe from heavy metals and repetitive labor.

Read more: Enabling the Factory of the Future