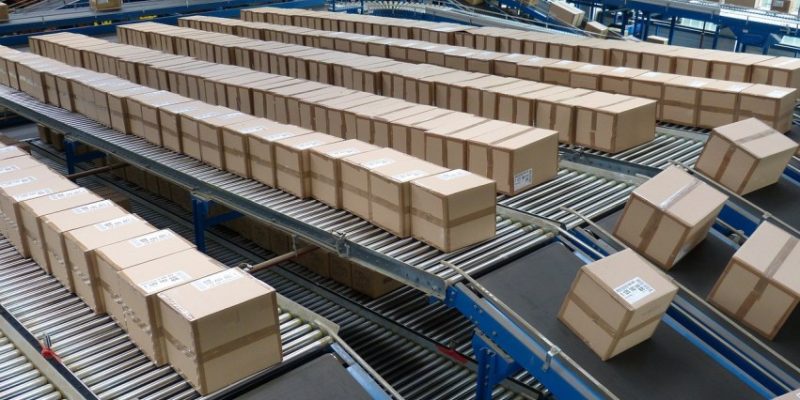 A conveyor belt is an essential tool in the material handling sector. They are the continuous moving strips that are used for carrying different materials from one place to another. Mostly used for conveying a large volume of materials in a short span of time. A conveyor belt is also known as a belt conveyor.

Industrial Conveyor belt system comprises of two or more pulleys. A continuous loop of transport stream the conveyor belt rotates about them. In order to move the belt and the material to transport one or both the pulleys should be power-driven.

These belts are generally made of rubber, PVC, Urethane, Neoprene, Nylon, Nitrile, Polyester, leather and others. The industrial conveyor belts are made up of multiple layers of material. Most of the material transporting belts comprise of two layers. The underneath layer is known as Carcass and it gives the linear strength and shape. The Carcass is made up of Polyester, nylon and cotton. The upper layer is known as the cover. Diverse variants of rubber or plastic compounds are utilised to make the cover.

Conveyor Belts that are used for Industrial Purposes:

Almost all of the manufacturers and suppliers were greatly dependent on the manpower before the emergence of industrial conveyor belts. The safety of the workforce and the quality of the product is a major issue under the manual handling of the products. In the current industry-driven scenario these rotating pulleys and belts are chosen for product handling.

Presently, a sophisticated technology is used in the Industrial Conveyor Belts over the simple belt conveyor systems. Advanced belts are opted based on their application by the industries. For instance, a simple metal belt would not be able to handle stones which could be precious or sensitive materials. Material handling Industries completely understand the types of conveyor belts. On the basis of their applications, they choose the safer, less time consuming, efficient belt conveyor systems as per their requirement.

The most widely used Industrial Conveyor Belts and their applications:

Solid, general-use belts:
These solid General use belts are commonly used in industries. They are made of rubber or a fabric such as nylon, polyester, neoprene, or nitrile. The primary applications of the belt can be determined by the properties of the belt. If we consider, mining and milling industries they commonly use rubber belts in handling the materials like raw ore and aggregates in a bulk quantity. Whereas, at the grocery stores, they make use of PVC conveyor belts and at the Airports belts made of Neoprene, polyester, or rubber are used for handling baggage.

Filter belts:
In order, to drain out the excess liquid or toxins, Water treatment industries commonly use these Filter belts which permit the particles to pass through a filter instead of being carried by the conveyor system.

Hinged belts:
The Industries which handle scrap and various small products for recycling mainly make use of these hinged belts. These belts are made of metal. These belts provide a flat, solid surface which rotates around the pulley by means of the interlocking hinges. These belts are very sturdy and can be used rigorously.

Plastic interlocking belts:
These are mainly used in food packaging industries and in the automotive sector. These belts are suitable for environments where there would be regular cleaning and belt change. These Plastic belts are the perfect substitute for fabric and metal belts.